1996 LAMBORGHINI SVR, ONE OF 32 MADE, PERSONAL CAR TO PHILIPPE CHARRIOL, KEPT IN PRIVATE COLLECTION

1996 LAMBORGHINI SVR, ONE OF 32 MADE, PERSONAL CAR TO PHILIPPE CHARRIOL, KEPT IN PRIVATE COLLECTION

1996 LAMBORGHINI SVR, ONE OF 32 MADE, PERSONAL CAR TO PHILIPPE CHARRIOL, KEPT IN PRIVATE COLLECTION AFTER THE SUPERSPORT THOPHY SERIES

In response to the major sports cars manufacturers promotion of gentlemen racing championships in the 1990’s (Ferrari Challenge and Porsche Super Cup), Lamborghini launched their own series, based on their flagship V12 model, the Diablo SV.

Just as the 348 and 355 Challenge cars, The Diablo SV-R is a lightweight, racing purpose built variant of the street SV, with weight reduced to 1350 Kg, center lock OZ wheels, fire system, stripped interior with OMP seat and harness, as well as an air jack system and Lexan side windows, among others upgrades.

The championship took place with sprint races in different venues throughout each year including:

Car #1 was used by the factory for VIP celebrity drivers.

This car, chassis #2 was commissioned and driven by the Swiss entrepreneur, luxury watch manufacturer and avid race car driver Philippe Charriol, who’s company, along with Lease Plan, was the Title Sponsor of the series.

Car #2 participated two years in the championship under the current livery and also under the TaG Heuer/Marlboro livery.  It was used also as press and PR car to promote the series and widely used by TaG Heuer for promotional events.

Right after ending of the series, #2 was placed in storage at Mr. Charriol’s ample collection, of historic and relevant race cars, hence the extremely low mileage and outstanding, accident free condition.

#2 has always been meticulously serviced and maintained, even if it hasn’t been used.  It Recently enjoyed a full, no expense saved, refresh and extensive service at household name service facility Auto Cure in Sweden, where it was mechanically serviced to perfect working order and original orange factory livery.

Service records, at Auto Cure are supplied with this amazing car. 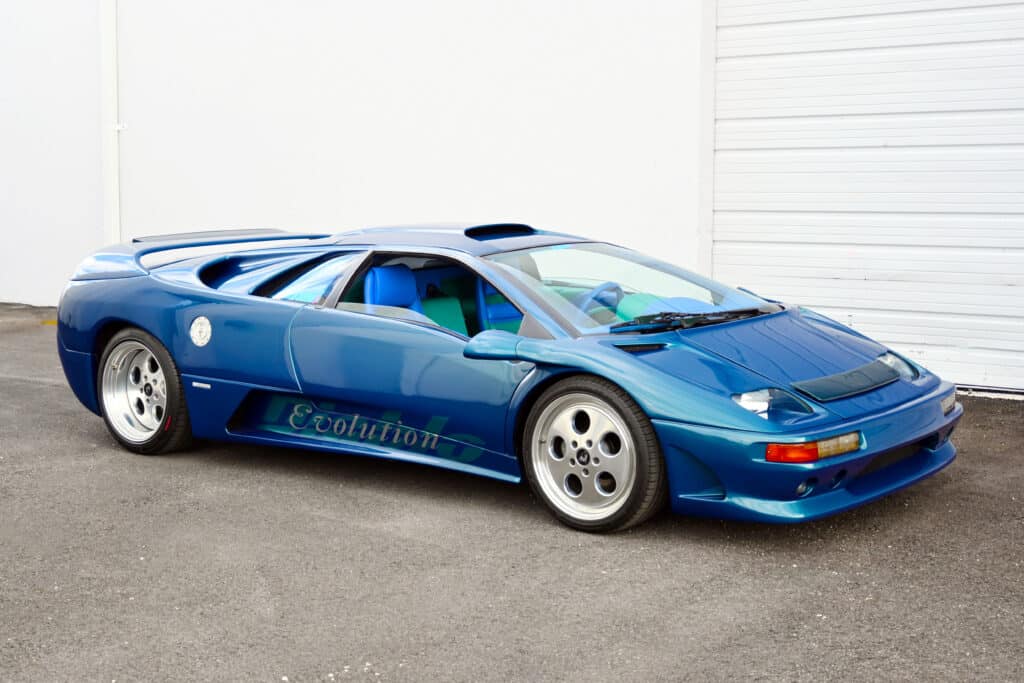 PROTOTYPE FIRST ONE OF 20 EVO BESPOKE DIABLOS EVER MADE, GENEVA MOTOR SHOW LAUNC